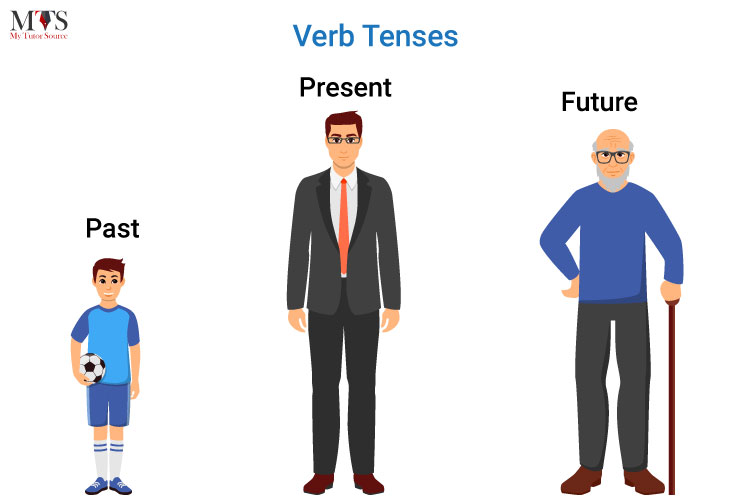 Brace yourself for a detailed study guide for learning verb tenses of the English language.

Verb tenses let us know how an action is related to time flow. Learning verb tenses can significantly improve your grammar skills.

Verb tenses have three main types, present, past, and future. They are divided into four categories; simple, progressive, perfect, and perfect.

Verb tenses are a bit lengthy, as there are twelve English verb tenses, making it hard for the students to learn and use them correctly.

However, it is interesting because the English language has only two ways of forming a tense from the verb alone; the past and the present. For instance, “we wrote” and “we write.” When forming the other verb tenses, we need to add “have, be, or will” before the verb, known as helping or auxiliary verbs.

Past tense is used to describe things that happened in the past.

It is further divided into four categories:

It describes the events, actions, or conditions that occurred in the past.

I took a shower before leaving for school.

I wrote a few poems for the school magazine.

I enjoyed my time travelling and vlogging over the summers.

It describes any action or event happening in the past, i.e., any occurring circumstance or continuing action which happened in the past.

I was not paying attention to what he said.

They were going to class when the bell rang.

He was leaving his job because he didn’t feel valued there.

Maria was traveling to the UK for a friend’s wedding.

When a situation occurred before a completed action in the past, we used past perfect tense. It also identifies the time when the action occurred.

I had never been to India until now.

She had dinner with her colleagues yesterday.

The plane had left the airport by the time I got there.

They had been waiting for Matthew for an hour before the announcement.

It describes an action/event that started in the past and sometimes continued until another action took place or another time.

She had not considered all her options thoroughly.

It had been raining cats and dogs all night, so he stayed over.

They had been dancing like there’s no tomorrow at the party.

I had been waiting for this moment all my life.

It describes the present events, actions, or conditions occurring in the current situation.

He plays the cello beautifully.

She loved hanging out with her friends.

We go to the movies every Saturday.

It describes the present ongoing events, actions, or conditions that are still not finished.

I am running late for work.

They were dancing on the stage.

He was looking at the clock.

The team is practicing for the match.

She is not coming with us to the movies.

It describes the present events or actions which are completed but in a present consequence.

Ayra has completed her homework.

I have a few spare dresses that you can borrow.

She has submitted the report to the CEO.

I have taken the exams twice already.

It describes a situation that started in the past and continues in the present.

I have been waiting for you since then.

She has been watching a movie for 2 hours.

I have been preparing for the exams for a year.

He has been working on this project for the last couple of months.

They have not been coming to the church for the previous three Sundays.

Used to talk about things that would happen in the future.

So do future tense:

It is used to predict/forecast something that will happen in the future.

I will go to the gym today.

She will play the lead role in the school play.

They will finish the project by Monday morning.

You will not break anyone’s trust by lying to them, will you?

It is used to describe an ongoing action at a particular instant in the future or something that will happen in the future.

I will be going out tonight with my friends

He will be leaving the city for good.

I will be answering all the questions in the exam.

Anders will be singing at tonight’s concert.

It is used to talk about a future action with a fixed date schedule. It expresses an event planned to happen at some particular instant in the future.

I shall have it done by tomorrow.

They will have baked a cake for her birthday tomorrow..

She will have arrived in New York for their match.

I will have stopped feeling bad by then.

It explains activities/events that are continuing or happening or done after an expected time instant.

She will have been waiting for this moment all her life.

You shall have been all settled to attend our wedding ceremony.

We will have been waiting for you to come back.

You can revise your tenses by checking out the table below:

Verb tenses limit confusion in communication by intentionally and deliberately directing our focus on defining the time when something occurred. Now that you are familiar with the basics of verb tenses, you can solve various online exercises and tests; to further strengthen your grip over the correct use of tenses.

Always make sure to use a consistent tense in your writing.

Alison sings and danced in the school play.

Alison sang and danced in the school play.

The first example contains both a present tense verb (sings) and a past tense verb (danced), making it hard to comprehend for readers. So always make sure that if both actions take place in the past, use the same past verb tense, and vice versa, in your sentence.

There is no need to fret if you are still unclear on the proper use of verb tenses. Our expert English teachers at MTS have got your back. Sign up today for a demo lesson to make learning English grammar fun and exciting.