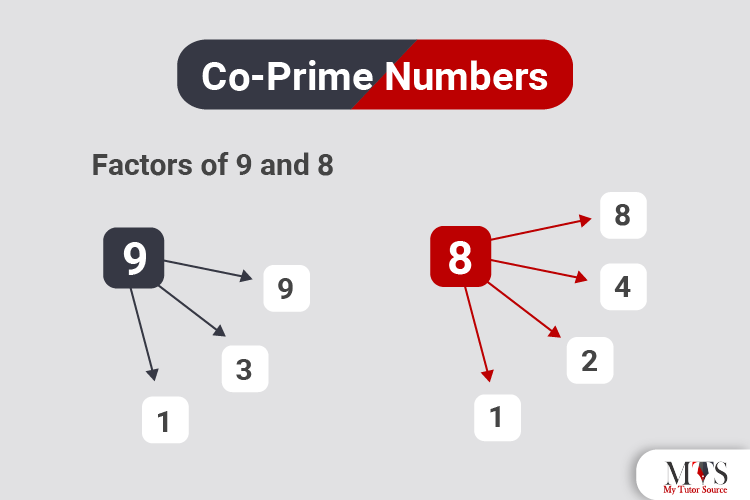 Scroll down to find out what co-prime numbers are in mathematics.

By definition, any set of numbers or integers having only 1 as their common factor is known as co-prime numbers. A minimum of two numbers form a set of co-prime numbers in mathematics and are also referred to as mutually prime or relatively prime numbers. Moreover, the HCF or Highest Common Factor of these numbers is 1.

Similarly, in order to check if the given set of numbers is co-prime or not, consider their all-possible factors first and then find their HCF or GCF. Let us take an example to understand the tips to find co-prime numbers better:

Following are a few points to help you understand the exact difference between co-prime and twin prime numbers.

Students struggling with math homework or any other concept must hire an experienced and qualified online or private math tutor. Numbers can sometimes be intimidating; that’s why we advise our students to go for extra help. Here are a few solved examples to help you understand the concept of finding co-prime numbers.

Question: Check whether 18 and 35 are co-prime numbers or not?

Question: Find the GCF or HCF of 59 and 97 if they are co-prime numbers?

Given that,59 and 97 are co-prime numbersThus, their GCF or HCF will be 1.

Question: Check whether 4 and 8 are co-prime numbers or not?

Explain how to find the co-prime of a number?

To find the co-prime of a number, find a number that can not be divided by the factors of the other number. Also, their HCF or Highest Common Factor is always 1.

Which number is co-prime of all numbers?

What is the Highest Common Factor of two co-prime numbers?

As 1 is the only common co-prime of all numbers. Therefore, the Highest Common Factor of two co-prime numbers is also 1, always.