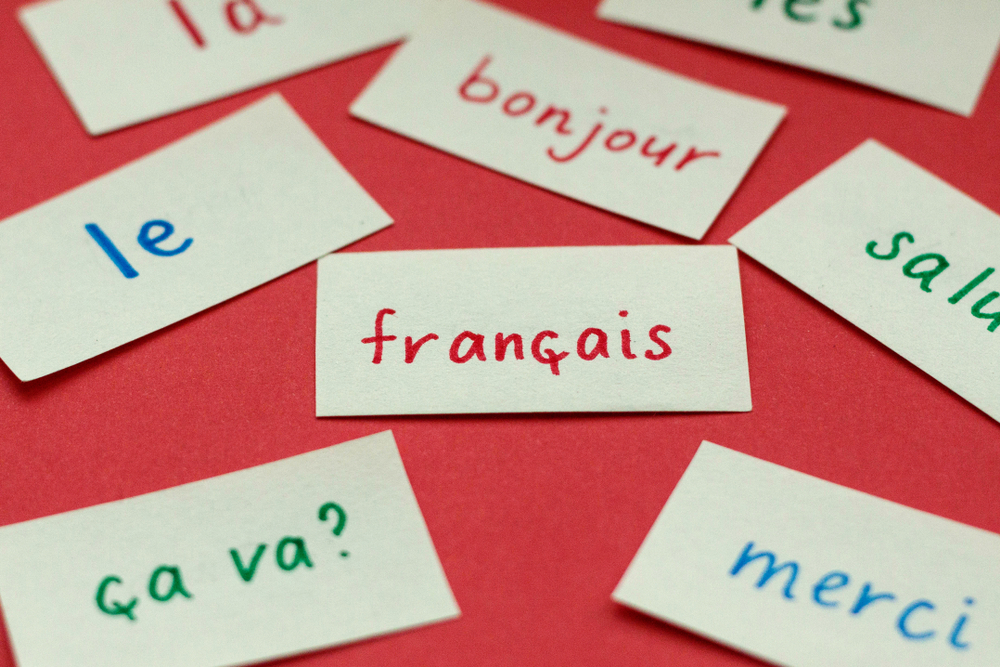 If you’re interested in learning French words, you're in for a treat.

The French language is a beautiful one and to learn French words in English is nothing but an absolute pleasure.

Not just for fun,

but learning the French language is also beneficial if you are planning to study or move abroad. Learning French is really known as an incredible skill. Just like these interesting idioms you should know so that it will increase your value when you are talking to a French.

However, do you know how many French words are there?

Well, the number is over 200,000 when we talk about the list of English words of French origin. Learning these many French words in English for beginners is really intimidating.

But there's some good news for you!

To hold a conversation with someone in French, you only need to know 5% of the total famous French words. So, are you just diving into the world of learning to memorize new and old French words? If yes, then you will be surprised to see that after learning only a few words and phrases you can easily talk to other people in French!

Now without making you wait any further, let’s get started with the basics and then move on to famous French words and phrases.

French pronouns include words such as “I”, “he”, “she”, or “you”. We have added “you” twice to the list because in French there are two forms of addressing someone: formally and informally. Here is a list of all the basic French pronouns:

If you want to get around the language, you will also need to know how to ask questions in French too, right? Here are some basic words that can help you do so:

There are only 2 basic French interjections that you need to learn:

Just by learning these two interjections, you will be able to have a lot of conversations, or at least answer questions.

Do you want to know what are the easiest French nouns? Based on the activities you like, different French nouns are the easiest and most suited to learning. Depending on word frequency, these are the words that you will most probably come across when talking to French people:

You need to know conjunctions and connector words if you want to form coherent sentences and speak them smoothly. Even though many connectors have more than one meaning, the one being used can easily be deduced via context. Here is a list of some basic French connectors and conjunctions:

Now that we have gone through the basic French words, nouns, pronouns, connectors, and conjunctions, it is time to go through some common French words and full-fledge phrases. Read on!

How do you say hello in French? You use the word “Bonjour” when you want to say hello to someone. It’s also one of the common French words used in English. We often use it casually to greet a friend.

If you think that bonjour doesn't feel formal, try adding madame or monsieur with the word and you'll instantly sound more formal. This is extremely useful when you're talking to your boss.

If it's a bit late in the day, use Bonsoir instead of bonjour as it means good evening,

You know how to say hello to someone, but how do you say hi to a friend in French? The most common French word for that's “Salut”.

But remember that even though it literally translates to the word “hi”, if you use salut the way you use the word ‘hi’ in English it can be a bit awkward because the French language is more formal than the English language.

In French, you wouldn’t say Salut to a stranger or a seller, unless you're talking to a child. However, saying bonjour to someone who is a good friend of yours isn't the best idea as well because it often comes across as distant and cold if used in the wrong kind of setting.

So, we recommend that you should use salut when meeting people you know quite well and bonjour when you meet people who you don't know and you're meeting them in a formal setting.

And if you still have doubts about when to use which one, just go with bonjour. It’s better to come across as distant than to be over-friendly.

After you've greeted someone by saying bonjour, bonsoir or salut, it's a nice idea to tell them that you're pleased to meet them.

Enchanté(e) means nice to meet you. It can do wonders for you if you use it with cordiality and sincerity. You need to use enchanté if you're a man and use enchantée if you're a woman. The extra ‘e’ in the brackets represent the gender of the person writing the greeting.

However, you don't need to fret about the distinction when you're speaking because no matter if you're a man or a woman, the pronunciation of this word will remind the same.

Are you at a party and it's already time to go home? Well, then don't leave without saying goodbye!

Au revoir is the word you need to use. It means goodbye, and you can use it with any person in any situation. You can consider it the goodbye equivalent of bonjour.

No matter what language you want to learn, it's important to know how to say thank you.

And when you want to thank someone for whatever reason in French, you use the word “merci''. You can use this word in any situation, however, if you want to add more nuance then you'll have to learn other words and phrases.

If you want to say thank you very much in French, use the phrase “Merci beaucoup”.

And if someone else says thanks to you, simply reply with “de rien” as it literally translates to you're welcome. And if you want to say you’re welcome in a more formal way, say Je vous en prie.

Moving forward to other words, it's equally important for you to know how to get someone’s attention and how to say sorry to someone in French

So, if you've messed something up or accidentally bumped into someone, apologize to them by saying désolé(e). And if there's a slow walker in front of you and you want to get that person’s attention, say excusez-moi, which means excuse me, obviously. It is possible to say excuse me is one of the words that are the same in English and French.

Another thing is that if you want someone to repeat themselves because you didn’t understand what they said the first time, you can just say ‘Pardon’ to them.

‘Please’ is another important word that we use daily. So, how do you say please in French?

You use the phrase S’il vous plaît which simply translates to please. You can use this phrase in almost every situation that you face.

There is an informal version of this phrase as well: s’il te plaît.

8. Saying That You Do Not Speak French (in French)

As someone who is learning French as a beginner or a foreigner vacationing in France, it's understandable that you won’t always understand what French people say to you. You can use the following phrases when talking to someone who is fluent in the language to make your experience easier:

9. Asking for Information in French

When you're on a trip to France there are going to be situations where you'll have to ask someone for some information. For instance, you want to know the wifi-password of a cafe. These phrases will help you:

And if you ask someone for directions, these phrases will help you understand the directions the other person is giving to you in French:

10. How to Order Food in French

Many restaurants in France usually have an English menu for foreigners but such restaurants are rarely the best choice if you want to get authentic French cuisine. Here are some phrases that will help you find your way at a restaurant in France:

Here are some more miscellaneous French words and phrases for you to memorize:

Now, look at some phrases:

If you want to take professional help in learning French, you can always request a private and certified French tutor from our website. We have a team of professionals that will cater to all your needs. So, what are you waiting for? Your private tutor is just a click away!