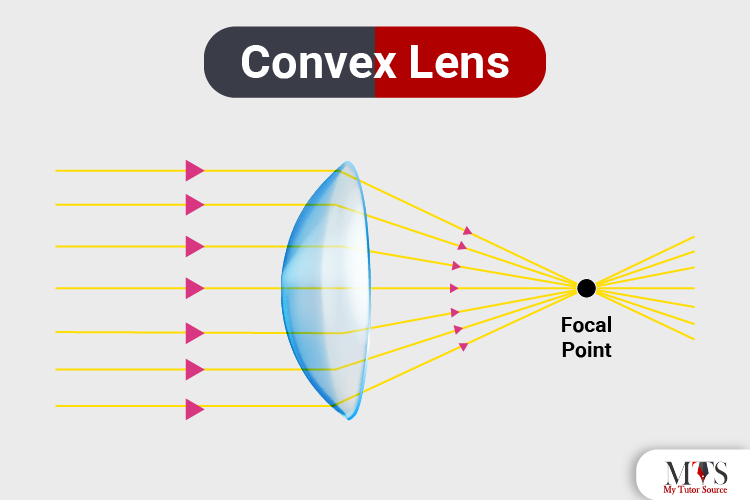 Lenses work on the principle of refraction in order to converge or diverge a ray of light, and in this way, they form an image. Refraction happens when a ray of light passes from one medium to another, and during this, it changes its speed and bends. A lens usually has one side that is curved. Based on the curve of a lens, it is classified as either a convex or concave lens.

Here we have talked about the working principle of a convex lens and how it is used in different devices for varying purposes.

This is the type of lens that has a curve in such a way that it is thin on the edges, but when it comes to the center, the lens is rather thick. In other words, if the surface of a lens is seen to be curved outside, then it is identified as a biconvex lens. The main purpose of the convex lens is to converge the ray of light coming in from an external source, and as a result, the ray of light is focused on the other side of the lens, which helps to form an image.

The point where the light converges is stated as the focus, and the focal point is known as the distance that is covered from the center of the lens to the focus. Since a convex lens is known to be the ray of light towards one particular focal point, this lens is also known as a converging lens.

Basically, a convex lens forms up two types of images, either real or virtual images. Real images are the type of images that can be seen on a screen, and they can be captured there. Only convex lenses are able to produce real images, so the lenses that are part of our tv screens or cinema screens that show us the captured image are basically using convex lenses.

RULE 1: When refraction occurs, a light beam must go through the focus of the lens. The light beam should be aligned or parallel to the principal axis.

RULE 3: as a result of refraction, the beam of light that has gone through the focus of a convex lens will be becoming parallel to that of the principal axis of the given convex lens.

Here we have discussed some of the functions associated with the convex lens that is important for its normal working principles:

Based on their structure and working, convex lenses have a broad range of uses. Some of these uses have been discussed below:

A magnifying glass helps us view the image formed in an enlarged form. It is not actually enlarged, but the lens in the magnifying glass makes us believe that the object that is behind the glass is actually big and enlarged. The magnified image is created when light rays are passed from the convex lens that is present in the glass. The extent of object enlargement depends on the distance of the object from the focal point.

When the light is not focused properly from the eye lens onto the retina, there can be a problem in image formation. This results in two kinds of problems, i.e., nearsightedness and farsightedness. When we face the problem of farsightedness, it is usually treated with the help of convex lenses.

In the condition of farsightedness, the image is formed quite far away from the retina, which makes the vision blurry. To fix that, a convex lens is added to the eyeglass. When wearing eyeglasses with a convex lens, the distance between the focal point and the lens is reduced, which makes it easy for the lens to focus the light onto the retina, and hence a clear image is then formed.

In the camera, a convex lens is added to capture a perfectly focused image. After adding the convex lens, the camera is able to magnify the object properly to form a clear image. A camera does not contain a single lens only. There are a series of lens that are added to it that makes it easy for the camera to focus and magnify clearly. Usually, a sandwich of the lens is made—a concave lens between two convex lenses.

Convex lenses have several shapes and sizes based on their appearance and working principle. They have been divided into several types. These are the few types of convex lenses as discussed below:

Since plano-convex lenses are used to magnify the object image when they are added between the eye and the object, they are used in microscopes and telescopes for magnification purposes. It is also added to the eyeglasses in order to treat the problem of farsightedness. This type of convex lens is also used in the process of material cutting via laser. Since these lenses help to widen the laser’s cut width, it helps the laser to make a more effective cut in the material.

This is the type of lens that has the properties of both concave and convex lenses. It is bulged outwards on one side while it is bulged inwards on the other side of the lens. In this way, this type of lens is identified as convex and concave both at the same time.

The concave and convex lenses usually differ with respect to the physical and general working properties. Based on their differences, they offer different uses. Here is some common difference that is noted in the types of lenses.

Shape of the lens

The shape of both lenses differs, which brings changes to their physical properties and appearance. Due to their difference in shape, their uses differ. The shape of the concave lens is such that it bulges out from the outward side and is thin inward.

Both lenses form different types of images. The convex lens is usually able to generate both types of images, i.e., real and virtual. It can form a virtual image when we place the object in the center of the focus. On the other hand, a concave lens is only able to generate an image that is virtual. This formed-up virtual image is erect and usually smaller in contrast to the object.

Both of these lenses are used to correct the eyesight issues. Some people have the issue of farsightedness, also known as hyperopia, while some people have the issue of shortsightedness, also known as myopia. The convex lens is used for the treatment of hyperopia in people, and the concave lens is used to treat myopia in people.

Lenses are used to either converge or diverge the ray of light that helps to form an image when a certain object is placed in between. There are two main types of lenses, concave lens, and convex lens. Convex lenses are bulged out in the middle while it has thin edges, and it is used to form both types of images, either real or virtual. When people have an eyesight issue, then convex lenses are used to treat the issue of farsightedness.

Learn more about the functionality of lenses and how they serve different purposes from our online and private tutors.