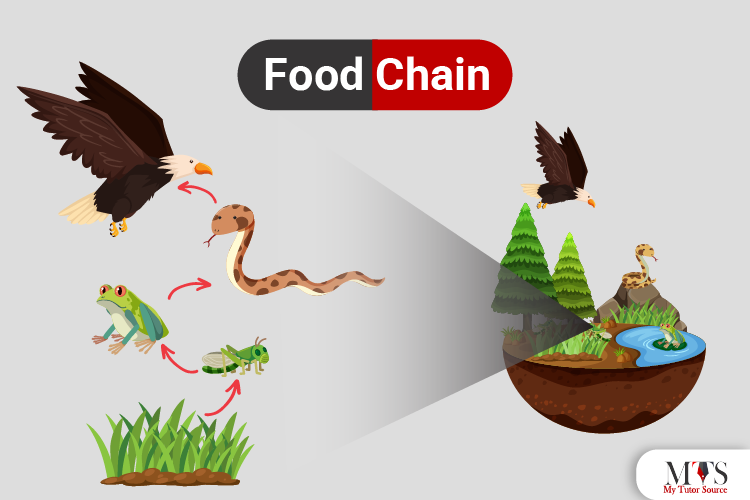 Table Of Content
Types of Organisms
Food Chain Definition
What is Food Web?
Types of Food Chain
Conclusion
Frequently Asked Questions
Everything in this world moves in a cycle, just like organisms! Organisms from different species constantly interact with each other in one way or another. They can compete with each other, live together, and eat each other too! If they eat each other, their nutrients and energy are also transferred from one to another. This is what we call a food chain!
A food chain begins when one organism eats another organism and so on. For example, you had a steak for lunch, so its food chain will be:
Grass → Cattle → Humans
This food chain shows the cattle ate the grass, and then you ate the cattle in the form of a steak! Sounds weird? Well, that is how it works!
Now, if you had a lettuce salad for lunch, the food chain will be:
Lettuce → Humans
This post will explain everything about the food chain, its parts, and its types in detail. Also, we will briefly go through what the food web is and how it is related and linked to food chains. But first, let's know about the two types of organisms in our environment. Knowing about these organisms will help in understanding food chai more conveniently. Keep Reading!

Autotrophs and Heterotrophs are the two main types of organisms in our environment. Let's take a look at them in detail!

Autotrophs are organisms that can make their own food and are also known as self-feeders! However, that food is its own organic compounds. They are the central part of any ecosystem, and we are not exaggerating here! Autotrophs are solely responsible for making the base of food webs and food chains. In short, they play the role of 'producers' in the entire food chain. There are 2 other types of autotrophs:

"A food chain refers to the order of events in an ecosystem, where one living organism eats another organism, and later that organism is consumed by another larger organism. The flow of nutrients and energy from one organism to another at different trophic levels forms a food chain."
Apart from this scientific definition, food chains also help in explaining the relationship and feeding patterns between living organisms. The food chain also involves trophic level: 4 stages in a food chain. These stages include producer, primary consumers, secondary consumers, and tertiary consumers. All these four stages are known as trophic level.
You should also see: Examples of Food Chain

Now that we have a basic idea of what a food chain is, it is time to go through its parts briefly. Read on!

The first and an essential part of a food chain is the sun. How? Because the food chain begins mainly with the help of the sun. It is the initial source of energy for every organism (plants and animals) on this planet.

I think we have already mentioned above what producers are. Still, producers are autotrophs such as green plants, algae, and cyanobacteria. Producers are also the first stage and level of a food chain. They draw energy from the sun, make food, and begin the cycle. Also, keep one thing in mind; only the organisms that can make their own food through photosynthesis can be producers.

Again, consumers are the organisms that are dependent on other organisms for food. Consumers are the vastest part of a food chain and include all types of living organisms. Herbivores, carnivores, scavengers, and parasites are the most common consumers in this ecosystem. Why? Because herbivores eat plants, carnivores eat other animals, parasites live on other organisms, and scavengers feed on dead organic material.
Herbivores are also known as primary consumers, and carnivores are known as secondary consumers.

Decomposers are the organisms that eat dead organic matter and get energy from them. This organic matter can be dead organisms, dead animals, etc. However, decomposers are an essential part of a food chain. They convert waste materials into inorganic materials. Some examples are land and nutrient-rich soil.
Decomposers help to recycle the nutrients and are further used by autotrophs or producers. In short, they help complete one cycle and start a completely new food chain.

What is Food Web?

A food chain clearly tells who an organism eats; however, sometimes, it becomes hard to elaborate on the entire ecological community. For example, one single organism can be both prey and predator at different trophic levels. In easy words, an organism can be consumed many times, and it can consume many times too.
Let's take an example of a hamburger patty: the lettuce on the patty is a primary producer, while the cow is a primary consumer. When so many food chains get interconnected, it becomes impossible to represent the energy flow properly.
That is where the food web comes to the rescue! A food web is formed by connecting several food chains to represent the relationships between them clearly. Also, a food web tends to be larger and more lengthy than a food chain.
Here is a pictorial example for you to explain how organisms and animals eat what:
In this food web example, you can see that species can consume organisms on different trophic levels. Arrow points are used in the picture to showcase how the predator eats the prey. Also, keep one thing in mind; the more complex the food web is, the more balanced the ecosystem will be.

I hope your concept about the relationship between food chains and food webs is clear now. Now, let's go through the two main types of the food chain in detail:

This food chain involves dead organic material while including plants and organisms like insects, worms, mites, algae, fungi, and bacteria. The detritus food chain begins when the food energy is transferred into decomposers. After that, other organisms like carnivores further consume that food energy. After that, some carnivores become the meal of bigger and stronger carnivores like snakes, frogs, etc. Now, protozoans, fungi, and bacteria are the primary consumers in this food chain that acts like detritivores and feed on detritus.

Food chains are extremely important to describe the relationships between organisms in an ecosystem. Therefore, it is essential to have an understanding of them. A food chain depicts how one organism is always dependent on other organisms to survive on this planet.
I hope this post helped you understand the concept of food chains and food webs. If not, there is no need to worry. You can always request a professional tutor from our website specialized in the subject. They will help you by clearing all your concepts and confusion regarding the food chain.

How to Manage Your Time as a College Student? 12 Pro-Tips

What is An Online Private Tutor? And How to Become One?

80+ Hard-to-Spell English Words You Might Not Be Aware of!

Studying Hard But Still Scoring Low? Here’s What You Need To Do!

What is The Source of Earth's Water?