How the Carbon Cycle works 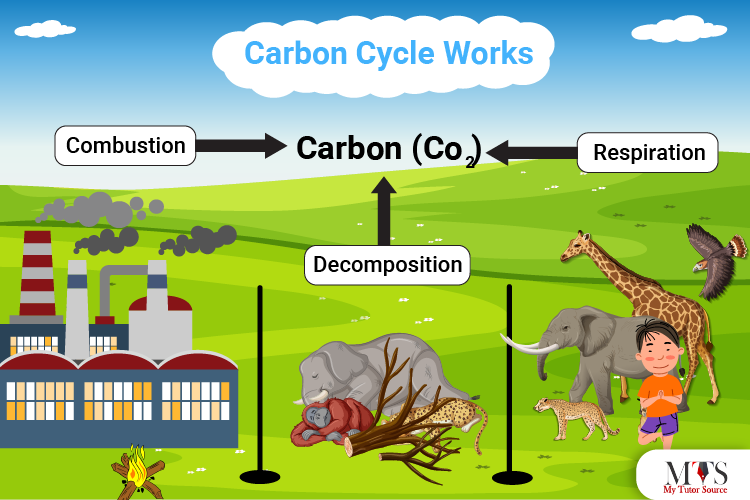 Table Of Content
What is the Carbon cycle?
Steps involved in carbon cycle
Carbon coming in the atmosphere
How is Carbon cycle important for the natural balance ?
Increasing levels of CO2 emissions
Conclusion

The carbon cycle demonstrates how carbon is utilized over and over again in the environment. Carbon goes in from the atmosphere to the biological forms and then comes back to the atmosphere. From minerals to the environment, carbons are found everywhere with constant movement.

Here we have discussed how the different phases of the carbon cycle occur and how it brings an impact to the biosphere. You can learn more about the topic from our private tutors.

What is the Carbon cycle?

Let’s talk about some of the main steps that are involved in the functioning of the carbon cycle.

The carbon cycle involves several steps through which it uses carbon in different processes. Here we have discussed the different steps involved in the carbon cycle and how they impact each other.

Carbon coming in the atmosphere

From the bodies in the soil

Carbon comes back into the atmosphere by either the processes involving the burning of fossil fuels or it comes through respiration. When we bury the dead bodies of animals and plants in the soil, the body is left there for many years. The bodies are referred to as the producers in the food chain, which are then eaten away by the consumers, also referred to as the decomposers. When the decomposers eat the bodies of the animals and plants in the soil, they then return the carbon dioxide back into the atmosphere.

The carbon produced by the water is also referred to as the oceanic cycle. The water takes in the carbon that is left as a remnant in the atmosphere and uses it to create calcium carbonate by the working of the animals present in the water. This product is then utilized to make up the hard shells present on the bodies of sea animals like oysters and clams. When these sea animals die, the hard shells then go to the surface of the ocean. Laying there, these hard shells experience pressure from their surroundings which turn them into limestone.

When this limestone is exposed to the air, the carbon from it is released into the air. In this way, carbon from the water comes into the atmosphere.

How is Carbon cycle important for the natural balance ?

Carbon is a very important component of the environment as it is essential to maintain the natural balance of the environment. The normal functioning of the carbon cycle makes sure that there is a protective layer present around the earth if the balance is disrupted. This can result in global warming and other climatic changes that will have far more adverse effects on the atmosphere.

On the other hand, animals use carbon for breathing out. They inhale the air in the form of oxygen and give out carbon dioxide in return. This process is known as respiration. If this process is disrupted, animals will not be able to breathe properly; hence survival will be difficult.

The cycle needs to be perfectly balanced because more emissions through the process of burning fossil fuels can also result in the increasing effect of global warming.

With more industrialization in the world, there is an increase in the burning of fossil fuels. This means there is an increased amount of carbon dioxide being released into the atmosphere. More than the required amount of carbon dioxide in the atmosphere is becoming a cause of intensified effect of greenhouse gasses. This increases the global temperature.

Having higher temperatures results in the melting of glaciers, and the natural bio-cycle is disrupted. This is why it is essential that there should be a perfectly balanced amount of carbon coming into the atmosphere.

During the industrial period after the 1850s, when there was a rapid effect of industrialization, people burned a lot of fossil fuels, and as a result of this action, more than required carbon emissions entered the atmosphere. This resulted in the increased climate. Rising temperature is making changes all over the world, including the melting of glaciers and making the world temperature unbearable for life on earth to sustain.

Ever since, industrialization has only increased. This increase is constantly resulting in the increased temperature.

This change in the climate has not occurred immediately. In fact, it was a slow process that has been making an impact for a long time now. A slow but major impact is making many changes in the environment that we live in.

How to minimize this impact

Less emissions of carbon in the atmosphere

Similarly, too less carbon or no carbon present in the atmosphere is also a bad thing for the atmosphere. As we know, being a greenhouse has carbon prived an insulating sheet to the earth, it is responsible for keeping the earth warm. We know that too much carbon can increase the temperature of the earth beyond bearable; in the same way, too less carbon will eliminate the presence of an insulating sheet around the earth that is keeping it warm. In this situation, the earth will be left to freeze. This is why it is necessary to make sure that the carbon cycle is working properly and making enough carbon to keep the earth’s temperature ideal for the survival of life.

Carbon is highly important for the normal functioning of the environment. The carbon cycle works in a way the carbon goes out from the atmosphere and then comes back to it. Many different procedures, as mentioned above, are involved in this cycle. Some organisms consume carbon, while some emit it in the form of carbon dioxide. This keeps the environment functioning normally.

Although carbon is important to the atmosphere, its presence at normal levels is more important. If the levels increase, they will result in other devastating effects like global warming.

The carbon cycle is a vast topic, and its knowledge gives an insight on how to manage it properly. Learn more about it from our online or private chemistry tutors.