How to Calculate Normal Force 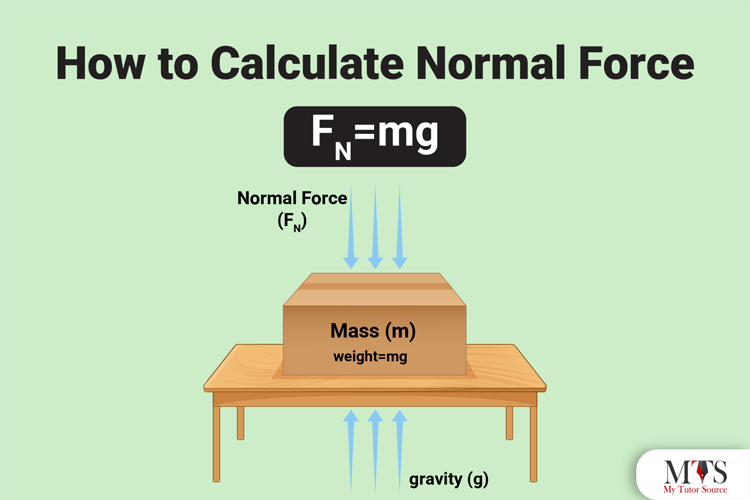 Physics is full of formulas, forces, and how they interact with matter, time, and energy. One of those forces is the normal force. Since you are here, we are sure you are willing to learn more about normal force, right?

This short guide will explain how to calculate normal force while describing its concept in detail. Not to forget, this lesson will be super easy for you to understand. Keep Reading!

What is Normal Force?

Have you ever walked mindlessly and bumped straight into the wall? Yes, the sensation and pain you feel after that is normal force!

By definition, the normal force is a contact force exerted by surfaces to stop other hard and solid objects from passing through them.

For example, if you put a box on a table or any other flat surface, the normal force will exert. But if the two objects are not in contact, they can’t exert normal force either.

Moreover, the normal force exerted will be as long as it is essential to stop the surfaces from crashing into each other.

The concept behind the word ‘normal’:

Talking about ‘normal’ in normal force does not mean ordinary or typical. Instead, it means ‘perpendicular force.’ Why? Because normal force, represented as N or Fn, always acts perpendicular to the two surfaces. Let us explain.

Think about it; it is a perpendicular force because it “prevents” solid objects from passing through flat surfaces (same direction), not sliding across. If they are sliding across each other, the force exerted would be friction force.

How does a Surface know to Exert Normal Force?

It makes sense if an alive human being exerts an upward force with their hands to stop an object. But how do lifeless and inanimate surfaces like a table or any other flat surface does that? Yeah, everybody finds it hard to believe; but we have an explanation.

Well, we have to blame Newton’s third law for this confusion. According to that law,

For example, we have a table with a sack of rice on it. Here, the table exerts an upward force (normal force) to stop the sack of rice from falling through. And yes, the table ‘knows’ to do it.

Flat surfaces can spring back with the help of a restoring force. After this, the table can reverse all sorts of deformation and come back to its original form while keeping the sack of rice safe and intact.

How to Calculate Normal Force?

Below, we will mention different slop surfaces and the normal force formula of each. These situations and angles include flat surfaces, inclined surfaces, external upward force, and external downward force. Read on!

1. The Normal Force Formula for object lying flat on a surface:

After applying Newton’s second law:Fn=mgHere,Fn is Normal Force,m is the mass of the object,and g is the gravitational acceleration.

2. The Normal Force Equation for an object on an inclined Surface:

Fn = mgcosθHere,Fn is Normal Force exerted,m is the mass of the object,g is the gravitational acceleration,θ is the angle at which the body falls

Fn =mg + FsinθHere,Fn is Normal Force exerted,m is the mass of the object sittingg is the gravitational accelerationθ is the angle at which the body falls

Fn = mg – FsinθHere,Fn is Normal Force exerted,m is the mass of the object sittingg is the gravitational accelerationθ is the angle at which the body falls

Example 1: A b0x weighing 1.5 kg is resting on a table. What is the amount of normal force being applied to the box?

Example 2: A box drops down on the table with a force of 250 N. The mass of the box is 20 kg, and the angle at which it fell was 30 degrees. Calculate the amount of normal force being applied to the box?

Q.1) Can normal force be downwards?

Ans. Yes, the normal force can act downwards and upwards both.

Q.2) What is the cause of normal force?

Ans. There are a lot of things that cause normal force, but it is mainly caused by gravity.

Q.3) How does normal force work?

Ans. The normal force works by acting perpendicular to its contact surface. However, the surface and the object contacting both should be solid.

Now that you have gone through the entire post, we are sure you know how to calculate normal force by now. However, if you still have any confusion, you can always hire a professional tutor from our website to clear all your concepts. Just let us know if you need help, and we will handle the rest for you!