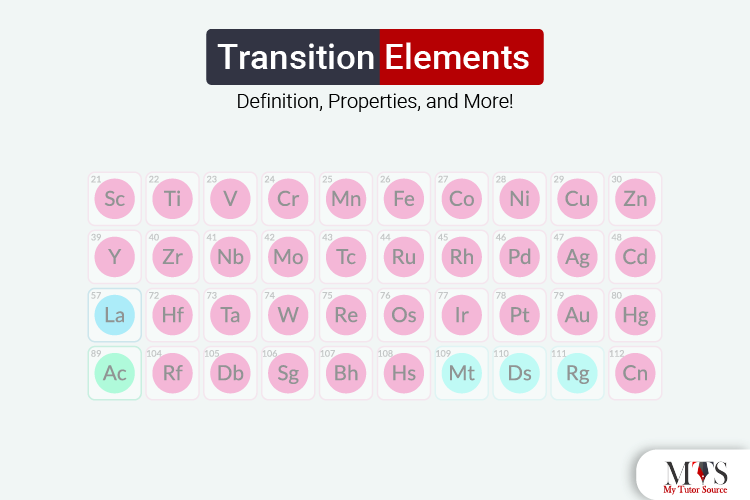 What are Transition Elements?

Transition Elements in Our Daily Lives

We come in contact with many transition elements in our daily lives. For example, iron is the kind of transition metal that is a part of our lives. From rings to cutlery to automobiles to buildings, everything has iron. In fact, even the blood in your hemoglobin contains iron.
Similarly, titanium is the kind of transition element we see in all lightweight and durable products present in our daily lives. Some examples are bicycle frames, jewelry, and artificial hips. Chromium is also used for automotive detailing and protective plating on things.

Like everything, transition elements also have some properties and characteristics. As we have briefly mentioned above, mercury, zinc, and cadmium are not considered transition metals because their electron configurations are slightly different. However, the other d block elements have the same properties. Now, let's briefly go through the properties of the transition elements:
Many transition metals also have catalytic properties. These properties can be extremely useful in producing chemicals or industrial production. For example, iron is used as a catalyst element to prepare ammonia. Additionally, we use vanadium pentoxide as a catalyst to prepare sulfuric acid.

As we have briefly mentioned initially, we use transition elements a lot in our daily lives. Iron, the most famous transition element, is the superstar of the construction industry. Why? Well, because it is equipped with great versatility and strength. It is also used in the Haber process as a catalyst to produce ammonia. Similarly, titanium is used in aircraft production, artificial hip replacements, and nuclear power plants.
The most common use of transition elements we see is in the form of nickel. It is the key element used in the production of stainless steel. Then we have copper, an element that provides maximum strength, flexibility, electrical conductivity, and malleability. Thus, copper is widely used for electrical wiring.

Understanding the concept of Transition elements is necessary, and we hope our post helped you understand it. If your concepts are still unclear, you can always request a professional and highly qualified private tutor from our website. So, what are you thinking? Your tutor is just a click away!

What are the characteristics of transition metals?
Here is a brief breakdown of the general characteristics and properties of the transition elements:
What are the metallic characteristics of transition elements?
Transition elements also contain a lot of metallic properties and qualities. These properties are high tensile strength, malleability, metallic luster, and ductility. Moreover, transition metals also are great conductors of heat and electricity.
Why are transition metals called noble metals?
The elements present in the lower right corner of the d-block on the periodic table are known as noble metals. These metals tend to be very unreactive because of their high ionization enthalpies.
What are d-block elements?
The elements that are present from the third group to the twelfth group of the modern periodic table are known as d-block elements.

How to Manage Your Time as a College Student? 12 Pro-Tips

What is An Online Private Tutor? And How to Become One?

80+ Hard-to-Spell English Words You Might Not Be Aware of!

Studying Hard But Still Scoring Low? Here’s What You Need To Do!

What is The Source of Earth's Water?