Solving the Mystery: Forty or Fourty 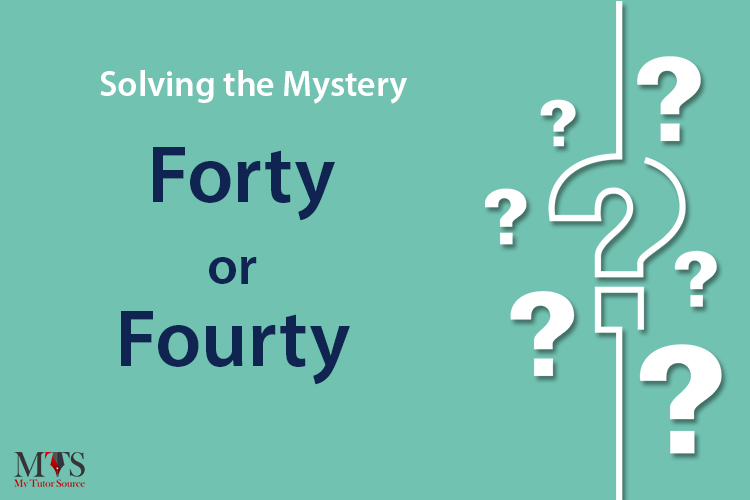 Table Of Content
When to Use Fourty?
When to Use Forty?
Some Correct Examples of Spelling of Forty
Is Fourty Still Used?
Why Is Forty So Unique?
Summary: Fourty vs Forty
Fourty vs forty has always been a topic of debate among people who are learners of the English language. English was used as a language in both the Old and New Worlds, which led to the rise of differences in spellings because rapid communication across long distances was not a thing at that time.
A lot of words are now spelled differently in British English and American English. The duality is confusing for many people. In the case of 40 as Forty or fourty, people think that the former is used in American English while the latter is used in the British one.
Spoiler alert!!!
One of two spellings is actually wrong.

When to Use Fourty?

Actually, you are never supposed to use Fourty because it is the incorrect one out of the two spellings. It has never been the correct spelling.
Related Read: https://mytutorsource.com/blog/how-to-speak-english-fluently/

When to Use Forty?

Contrary to popular belief, this is the only correct spelling of 40. It can be confusing to not use fourty since the base number is spelled as four and the ‘U’ is not excluded in other number words such as fourty-four or fourteen but that is not the case for forty. Plus, even though there are many different British and American spellings for many words, forty is not one of such words.

Some Correct Examples of Spelling of Forty

So, when you are writing the number 40 in English, the only correct option is forty.
Hire the Best Tutor in Your Area Now >>

Even though fourty is universally rejected as the spelling of 40, it is still used, for example:
Fourty-four states, and the U.S. Virgin Islands, and the District of Columbia, can take part in Mega Millions. – Staten Island Advance.
If you still find yourself getting confused over whether you should use forty or fourty, you can remember it by keeping in mind that forty has the word ‘for’, and forty is correct for everything.

Why Is Forty So Unique?

Forty is different as it does not use the base spelling four, but how did it become so unique? The Online Etymology Dictionary has traced the spelling of forty back to the Old English from a Northumbrian word that brought together the two terms with the meaning “four” and “group of ten” into a compound term. Its spelling appeared in expressions in the form of forty-niners and forty winks in 1821.
In case you are curious, forty-niner is someone who migrated to California in 1849 in search of Gold while forty winks mean a short nap. In fact, a San Francisco football team is named the 49ers. You can also find the use of the spelling of forty in old literature. For instance:

So, what is it; Forty or fourty? There is a list of words in English that have multiple spellings depending on their origin, but forty has only one acceptable spelling. Fourty is not a word, it never was one. The only way to spell 40 is forty. Just remember the ‘forty is for everyone’ memory trick and you will be good to go.
And if you ever get confused and are unable to remember what the right spelling is, you can always come back to our article to know the right spelling of forty.